Opinion: The Addition of the Women’s 1500-Meter Freestyle Event Is a Step Forward, But It Does Not Fix Gender Inequality in Swimming The 1500-meter freestyle event has been in the Olympics since 1908 for over a century. Ever since then, the event has only been held for men, with many believing that women were unable to perform at that level, and thus actively limiting women to swimming 800-meter events, which perceives gender inequality. However, Olympic swimming has finally put an end to these rules and negative ways of thinking.

This year, at the 2021 Tokyo Olympics, the 1500-meter freestyle will finally be held for female swimmers. Katie Ledecky, one of the greatest swimmers of all time, made history on Wednesday night when she became the first American woman to qualify for the Olympics in the 1500-meter freestyle, and she decimated all her competition.

“The men have had a mile at the Olympics since 1908…and now we’ve finally got one,” Ledecky said. “I am just grateful we have the time; that’s a great step.”

In a full-circle, poignant moment, Janet Evans, the U.S.’s most decorated distance swimmer, and four-time gold medalist was there to present Ledecky with her medal. Evans held the 1500-meter record for almost 20 years, from 1988 to 2007. She never got a chance to swim in this event in the Olympics.

“I love it,” Evans said. “It’s a little bittersweet for me because it was my best race. But I just love it. It’s so great that women finally have this opportunity.”

In 2017, the Executive Board of the International Olympic Committee announced their decision to include the event, along with 14 others, in the Tokyo Games, marking “a key milestone in the evolution of the Olympic program by introducing youth and urban innovations, significantly improving gender equality, and reducing the overall number of athletes hence reducing the Games’ footprint.”

“As a father of four daughters, it’s frustrating that it took this long,” said three-time Olympic gold medalist swimmer and ESPN swimming analyst Rowdy Gaines. “It’s unbelievable. Someone thought women were not strong enough 50 years ago. It’s a relief (for the athletes). I just feel bad for the generation that didn’t get a chance.”

Ledecky added, “I don’t know how much control I have over the schedule, but the men have it a little easier. I don’t know if they will ever change, but I’m game for whatever.”

The addition of the women’s 1500-meter freestyle event is decades overdue, and with it, we see gender equality in swimming begin to lessen. However, the work is far from over. This should be a celebratory moment for female swimmers everywhere, but it is marred by an abhorrent scheduling decision that shows that true equality in the sport has not yet been achieved. 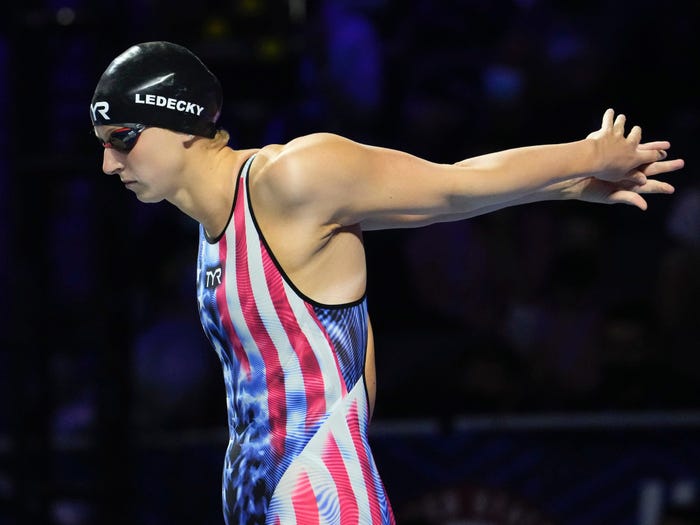 Katie Ledecky, one of the greatest swimmers of all time, made history on Wednesday night when she became the first American woman to qualify for the Olympics in the 1500-meter freestyle, and she decimated all her competition.

The women’s 200 and 1500-meter freestyle events, both terribly grueling events, will be held on the same days when the men’s events are not. Female swimmers should not be forced to prepare for swimming, not one but two daunting events in one night, while male swimmers are allowed to swim their shortest event (the 50-meter freestyle) prior to the 1500-meter swim.

This raises the question, why is it not the same for the women’s events? Why are women at a disadvantage, and why are they poised for less-than-peak performances because of this horrendous lineup? This situation was clearly avoided and thought through ahead of time for the men’s events. Why was the same thoughtfulness not utilized when scheduling the women’s events?

2021 will be the first year to hold the 1500-meter freestyle event for women, and it is a big step towards achieving gender equality in swimming. Although female swimmers can celebrate this step forward, there is still a lot of work to be done, and that is glaringly evident in the women’s event scheduling. Hopefully, this problem will be amended after hearing adequate criticism, and female swimmers will receive the same privileges as male swimmers when it comes to getting proper rest before swimming, one of the most difficult events in the Olympics.

Ending gender inequality in swimming can be attainable, and although there is a long journey ahead, there is certainly light at the end of the tunnel.