After an impressive run for both sides in the Euro 2020 Cup, Italy and England both look to come out on top when the dust settles.

Two proud nations who have rich soccer history square off Sunday for the ultimate prize. Leading up to this point, both Italy and England entered the tournament with weaker competition within their groups, with the exception of Switzerland.

England was in Group D with Croatia, Czech Republic, and Scotland, while Italy was placed with Wales, Turkey, and Switzerland in Group A.

In comparison to one another, England is a team with more veterans, while Italy is more of a young team with lots of potentials. Circo Immoble, Francesco Acerbi, and Leonardo Acerbi are the few Italian veterans on the roster.

Up until the last game against Denmark in the semi-final, England held their opponents to zero goals which is extremely impressive. They thrive off their defense and score on the opposite side of the field when the opportunities present themselves.

Italy, on the other hand, has proven to be an extremely well-coached team led by coach Roberto Mancini. Their game is predicated on ball control and speed.

Something interesting to watch in this game is the play of both goalkeepers. Gianluigi Donnarumma for Italy has been absolutely fantastic at just age 22. The same could be said for English goalkeeper Jordan Pickford, as well, who has only surrendered one goal this entire tournament. 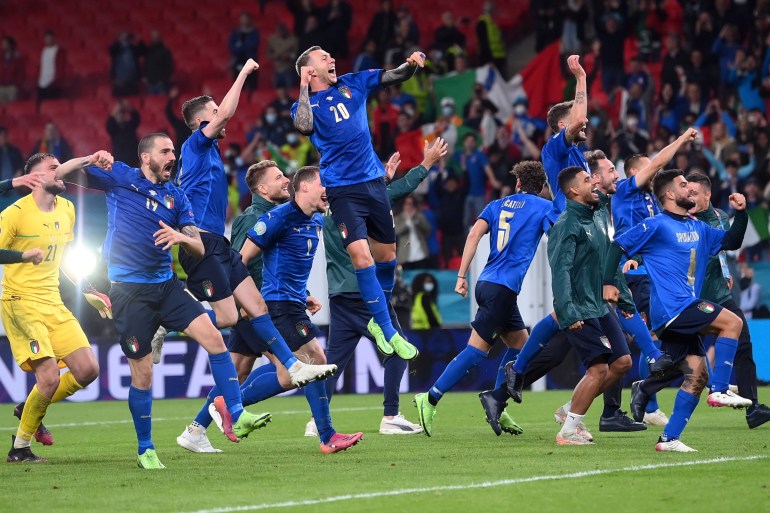 After an impressive run for both sides in the Euro 2020 Cup, Italy and England both look to come out on top when the dust settles.

Due to their stellar play, it would not surprise anyone if the game only saw one or two goals scored. It will be intriguing to see if the pressure of the moment will affect their games at all. If so, it could cause their respective teams lots of issues.

If Italy is able to keep possession like they have been all tournament long, I see them being able to capitalize on their opportunities given that they will have frankly more than their opponent.

If England, however, can clamp down on defense as they have been thus far, I see their counterattack led by Raheem Sterling paying dividends for them. He is extremely fast and shifty with the ball. Two areas where Italy could be vulnerable against.

Nonetheless, I like Italy in this contest. They have been the most consistent team of the tournament and look the most dangerous when they are clicking on all cylinders.

England has looked decent thus far, but their level of competition, in my estimation thus far, will affect their preparation heading into the game. Unless you have been tested by top-notch quality teams leading up to this point, it will be challenging to expect that the same style of play to work against a powerhouse like Italy. Unfortunately, it is not feasible to simulate this in practice either.