Odds That Aaron Rodgers is Green Bay Starter in Week 1 Aaron Rodgers had a great 2020 NFL season in which he took the honors for MVP. He threw 48 touchdowns, five interceptions, and 4,299 yards. Rodgers had a completion percentage of 70.7 and a QBRating of 103.9. With a successful season in the record books, most fans would think that the player would want to remain in the system; however, Rodgers looks like he wants to take his talents elsewhere.

Odds That Aaron Rodgers Will Stay in Green Bay

The Green Bay Packers as an organization do not know what direction to go as the relationship has reached a point of no return and turmoil. Aaron Rodgers is unhappy for a couple of reasons, as the 37-year-old believes that he has a lot of gas left in the tank. Just look at his rival, Tom Brady, who won a Super Bowl with the Tampa Buccaneers.

As we’ve stated since the season ended, we are committed to Aaron in 2021 and beyond,” Gutekunst told ESPN. “Aaron has been a vital part of our success, and we look forward to competing for another championship with him leading our team.”

The star was unhappy with the front office’s decision that dates back to last year’s NFL Draft. The Packers did not inform Rodgers that the team was going to trade up to draft a quarterback, which ultimately became Jordan Love. It’s an unfortunate situation because the team has a great core of players to be contenders for a while, but Rodgers has already informed the team that he does not want to return to where the Discount Double Check was born.

It could be a possibility that the Green Bay Packers may package Rodgers to get another quarterback to take over for Rodgers. Another result is the Packers may trade Rodgers for other assets to give Rodgers’ predecessor weapons to build around. The last result is Rodgers comes back for another season until they find a trade partner. 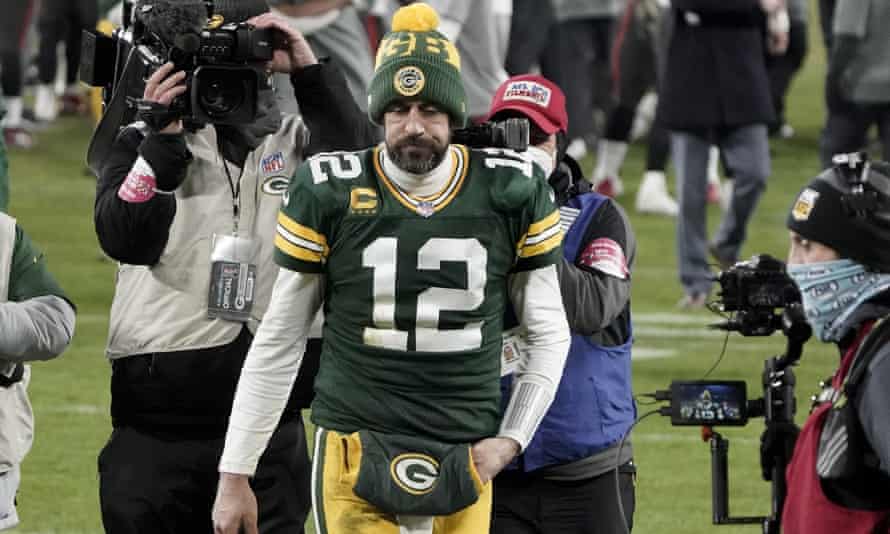 With a successful season in the record books, most fans would think that the MVP would want to remain in the system; however, Rodgers looks like he wants to take his talents elsewhere.

Other than him returning wearing the green and gold uniform. There is one team that is consistently mentioned, and the rumored frontrunner is the Denver Broncos. The Broncos were in a similar position in the 2012 season by bringing in Peyton Manning.

Manning was able to bring the Broncos a championship, and Rodgers could possibly do that as well if he gets dealt to Denver as Sportsbetting.com lists Drew Lock as a 3:1 favorite to take the first snaps as a Green Bay Packer. The odds shift as there are weeks where Rodgers and Derek Carr are tied for second and third to be the next Packers’ quarterback. Rodgers returning to Green Bay is a good possibility, but there are new waves of rumors circulating.

Rodgers is reportedly talking to other players to come and join him on his new team. Julio Jones also wants out as the Atlanta Falcons are exploring the market for a trade partner. It would be interesting if Jones and Rodgers team up on a new team.

Where will Rodgers be in Week 1?

If you are going to place a bet, the Broncos, then the Raiders are the best bets. The Saints Taysom Hill and Jameis Winston at QB. The 49ers selected Trey Lance out of North Dakota State in this year’s draft. Teams that miss out on Rodgers may be in the running for DeShaun Watson or vice-versa.