Serena Williams Out Of French Open During Sunday’s women’s singles matchups, Serena Williams fell to Elena Rybakina to end her time at the French Open.

It was not a close match, as Williams was defeated in straight sets of 6-3, 7-5 by the Russian-Kazakhstan player to send her home in the fourth round. Williams’ 21-year-old opponent has been ready to showcase her skills since being named to the top 100 in 2019. She was finally able to display her weapons on the biggest stage against one of the biggest names in women’s tennis.

Williams was unable to find her rhythm, with Rybakina forcing her to both sides of the court and making her break a sweat to keep up while Rybakina stayed poised on the baseline. Williams over-compensated for her uncertainty and was not able to touch the skills her opponent was displaying.

Williams is known for displaying her emotions related to a match, but her opponent Rybakina, after winning the biggest match of her career, had no reaction to the win.

“Everybody laughs about my reactions, but for me, it’s much easier like this, not to show any reactions,” Rybakina said. 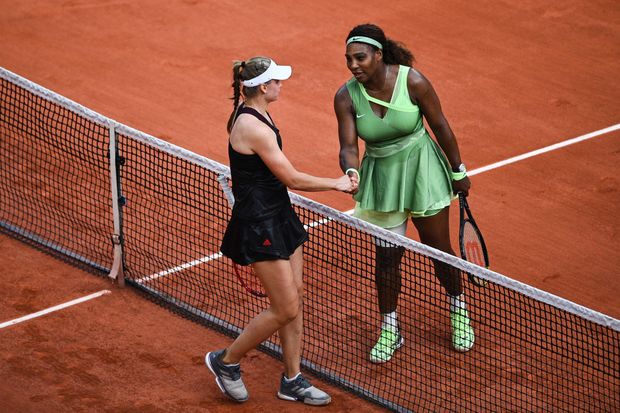 During Sunday’s women’s singles matchups, Serena Williams fell to Elena Rybakina to end her time at the French Open.

As for Williams, she will begin preparation to compete in Wimbledon, which is set to start on June 28.

Although the loss is, of course, upsetting to Williams, as it is for any player who makes it to this level of tennis competition, she has had plenty of accolades in her career as she is currently seeking her 24th Grand Slam singles title. Williams has won the French Open three times but has had trouble getting her footing in the tournament in recent years. The American has been unable to move beyond the fourth round since 2016, when she was runner-up.

If Williams can earn her 24th grand slam, she will tie Margaret Court for the most singles grand slams in women’s tennis. Court retired from the game in 1976 at the age of 34, and Williams will turn 40 this upcoming September. Although the tennis star has given no indication as to if or when she is going to retire, she is much older than many of her competitors.

It begs the question as to how many more opportunities Williams will have to tie the record.

Focusing back on the tournament, the remaining women in the singles competition at the French Open, including Rybakina, have never entered into a grand slam semi-final, with only Pavlyuchenkova having competed in a quarterfinal.

Whoever makes it will be a first-time grand-slam finalist and will give the tennis world a look into the next generation of champions.

Looking more into the statistics of the match, it is clear to see why Rybakina came away with the win. Williams claimed just 59% of wins on the first serve and only 43% on the second.

Rybakina dominated on every other important stat as well, with more points won with 66 and more service points won with 48. She was also able to convert five breakpoints as well to secure the win.

“I am so happy with my match today. It was amazing,” said Rybakina.

The quarterfinals for the French Open are set to take place on June 8.