The NHL Stanley Cup Playoffs started with 16 hopeful teams vying for their chance to raise Lord Stanley’s Cup. We are now down to 4, including the reigning champions Tampa Bay Lightning.

On one side, we have the Vegas Golden Knights, the regular season second-place team of the West Division.

In the first round, the Golden Knights took care of the Minnesota Wild in 7 games. They then disposed of the President’s Trophy-winning Colorado Avalance in 6 games to make their way to their third conference finals in four years.

They will be facing off against the Montreal Canadiens. Montreal, who is normally a member of the Eastern Conference’s Atlantic Division, competed in the North Division this year against all their Canadian counterparts due to COVID-19 restrictions and division restructuring. They will be getting their first taste of action outside of Canada this year versus the Knights.

The Canadiens beat the Toronto Maple Leafs in the first round in 7 games. They proceeded to sweep the Winnipeg Jets in the second round to capture their spot in the Conference Finals.

The Canadiens’ last trip to the Conference Finals was in 2010 when they lost to the Philadelphia Flyers in 5 games.

On the other side, we will see Barry Trotz lead the New York Islanders into a Conference Finals matchup versus the defending cup champions, Tampa Bay Lightning.

This will be a rematch of last year’s Eastern Conference Finals, where Tampa came out as the victor of the series 4-2. Tampa Bay went on to face the Dallas Stars and beat them in 5 games to win the Cup.

Tampa Bay is Unstoppable and Healthy

Tampa Bay spent the entirety of this regular season without arguably their best player in Nikita Kucherov. They were also missing Steven Stamkos for most of the season, and Vasilevskiy dealt with some injuries as well. And they still finished third in the Central Division with a record of 36-17-5, once again arguably one of the best divisions.

Tampa Bay versus New York is a series 265 days in the making. That’s how long it has been since these two teams met in the 2020 Eastern Conference finals, in which Tampa Bay won the series in six games.

It’s also how long it has been since they’ve faced each other in any kind of game since both of their competition was limited to the division they competed in due to NHL COVID restrictions.

The Islanders, who finished fourth in their respective division, have been playing great hockey without their captain Anders Lee. Lee was ruled out for the season in March with an ACL Injury.

That being said, there is nothing that scares me about the Islanders versus the Lightning.

Steven Stamkos (13), Brayden Point (12), Alex Killorn (12), and Victor Hedman (11) join Kucherov as the Lightning leading point-getters. And they all stunningly have a point a game or above. This doesn’t even include the depth scoring they have. They are a scary team.

The Islanders’ offense this postseason have come from their top lines and the likes of Mathew Barzal. He has 9 points in 12 games this playoff and 6 in the last series against Boston. He will be the key offensively for the Islanders. 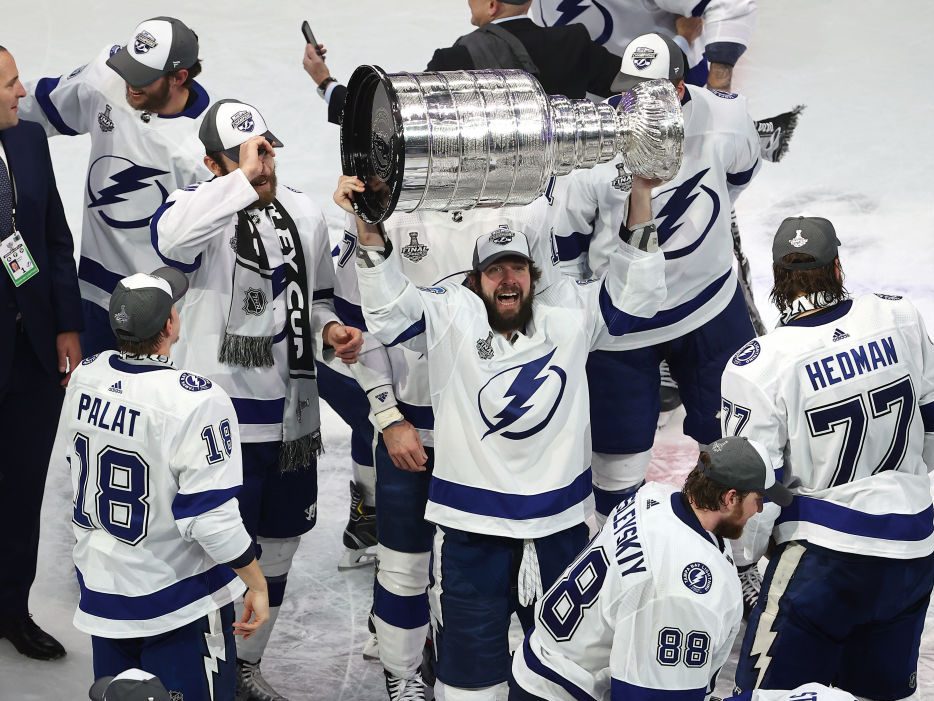 The NHL Stanley Cup Playoffs started with 16 hopeful teams vying for their chance to raise Lord Stanley’s Cup. We are now down to 4, including the reigning champions Tampa Bay Lightning.

The Islanders may take the cake defensively despite the presence of Hedman and Mikhail Sergachev on the Tampa D line.

The Islanders and Barry Trotz know defense. The team had the second-lowest GA/GP in the regular season at just 2.23, and since Trotz arrived from Washington after winning the 2018 Stanley Cup, the Long Island team has been home to a league-best 2.46 Goals against average. However, in this playoff, the Lightning have boasted a better Goal against average than the Islanders at 2.36, while the Islanders have been at 2.75.

The Lightning have the advantage in goaltending with Andre Vasilevskiy against Semyon Varlamov for the Islanders. Vasilevskiy is a perennial Vezina candidate at this point and earned his third nomination in a row for the trophy this year. Ilya Sorokin has made a few appearances in these playoffs.

Trotz is known to go with the hot hand with his goaltenders, and it worked to his advantage in the 2018 Playoffs when he benched Phillip Grubauer in Washington.

The Lightning also have the advantage on special teams.

There’s really not too much to say about this one other than Tampa Bay’s power-play is connecting at 41.7 percent in the NHL Playoffs. That is absolutely insane. And the opposite of them will be the awful Islanders’ penalty kill is 61.5 percent effective. However, the Islanders’ power play is operating at a respectable 28.1 percent. The Lightning are doing significantly better than the Islanders on the penalty kill but have still not been effective at around 78%

I think the Lightning have the clear advantage in this series and have an easy path to the Conference Finals. Then again, I had Colorado making it this far, and they fell out in 6 games against the Knights.

Speaking of the Vegas Golden Knights, they face the Canadiens in the battle of the North and West Divisions.

Both of these teams will present a challenge to the Lightning, but Tampa Bay will have gone through the two toughest divisions after this playoff and will be ready for any challenge from the North or West.

Once Tampa Bay got Kucherov and Stamkos back, they hopped on the horse and kept running and galloping, and they have not stopped yet. I don’t think any team has what it takes to knock this Tampa Bay Lightning team off its saddle. The Lightning are simply too stacked.

Kucherov, Stamkos, Point, and Hedman will present too much for opposing team defenses, and Vasilevskiy has been the backbone of this team for 4 seasons now. They are too formidable of an opponent to go through.

The Tampa Bay Lightning will be your 2021 NHL Stanley Cup Champions. Back-to-Back.