The Rest of the World is Catching Up to USA Basketball The 1992 USA Basketball “Dream Team” introduced the NBA to the rest of the world. Now, young players have lived out their dreams to play international basketball and fulfill their dreams of making it into the NBA.

The Olympic teams are supposed to be a group of elite NBA Players from the United States that is expected only to win the gold medal and nothing else. However, in recent years, we have slowly regressed from this theory, and it is hurting the brand.

2004 was the second time in Olympic basketball history that we failed to win either Silver or Gold medals and was the first time the US did not win Gold since NBA players were introduced to Olympic teams (1992).

The team selection was extremely controversial and quite stupid, in my opinion. The team consisted of 6 players who were either finishing their 2nd or 1st year in professional basketball. There was no veteran experience on this team, as this was everyone’s first selection in their careers. Clearly, this was going to be a rough tournament for them, even in the exhibition games before the Olympics.

2008 was called the “Redeem Team,” and it was a MUCH better roster than what we got in 2004. They went for a more experienced and older roster this time, headlined by the great Kobe Bryant. LeBron James, Dwyane Wade, Carmelo Anthony, and Chris Bosh were all well into their NBA careers at this point and were huge factors in the success of this team.

2012 was arguably the second greatest Olympic team ever assembled, right behind the 1992 Dream team. In fact, this was the year that they blew out Nigeria by 80 points. They were so good that many people thought they would have actually beaten the Dream Team.

2016 was a downgrade from that 2012 team but was still very successful in the Olympics. They had a bit of a scare against France, but other than that, it was easy sailing for team USA again.

Now we’re here at 2021, with the WORST team on paper I have ever seen from team USA. I am not sure who picked this team, but they really were just picking random starting 5 players from the NBA and thought they could win these Olympics with ease.

The first two exhibition games were very rude awakenings for not only the players but fans as well. The rest of the world has caught up with the NBA and has been producing NBA-caliber talent for years now. We see it in the NBA. 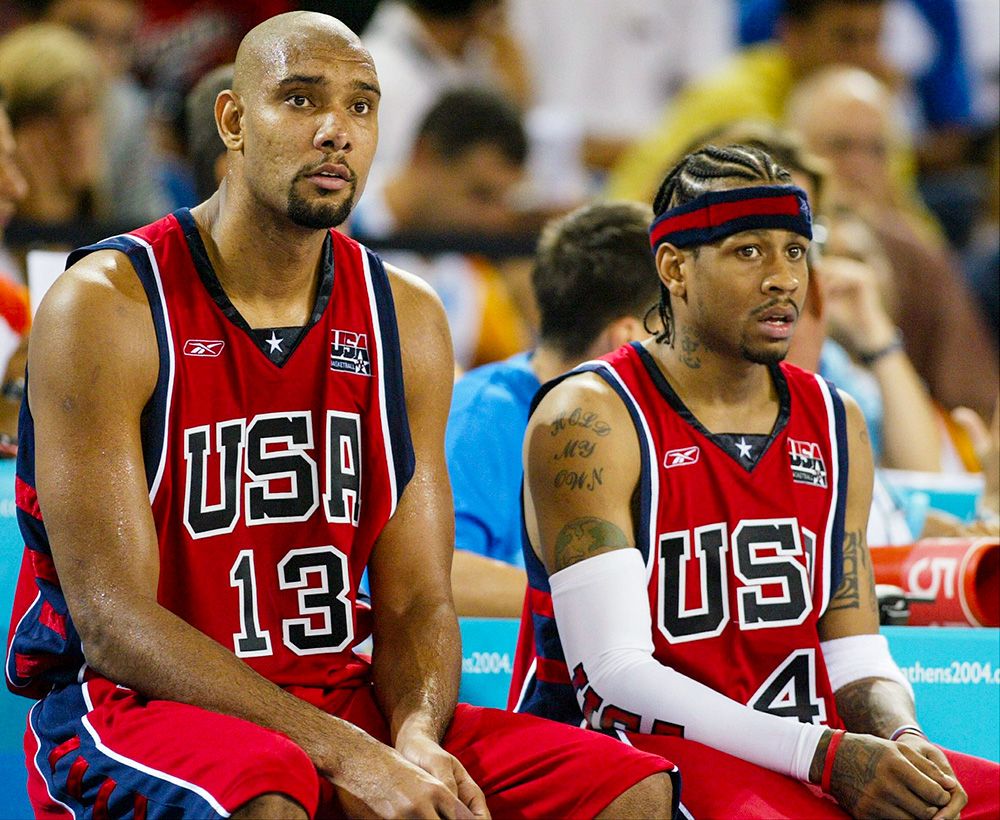 Tim Duncan, Allen Iverson, and the rest of the 2004 US Men’s Basketball team failed to win the gold medal in Athens, becoming the first time a group of NBA players didn’t win the top prize while representing USA basketball.

International Talent in the NBA

There are just so many big names in today’s game that are international players. They have opened up the league for other players to come in and make a name for themselves.

Giannis Antetokounmpo is THE guy right now in the NBA, including in these playoffs. He’s a two-time MVP and DPOTY in just his 7th season. Many people were not high on him because of his frame and the fact that he was coming from Greece. But he has proven all the doubters wrong and has continued to improve his game every season.

Luka Doncic has been the biggest young star ever since he was drafted in 2018. Even when at Real Madrid, he was tearing up his competition, and he’s continued to do the same in Dallas. Now, he gets to represent his home country Slovenia in the Olympics, and hopefully, they win a gold medal, which he thinks is more important to him.

Nikola Jokic, the reigning MVP of the league, has been changing the game since he stepped foot into the league. The big man has revolutionized the game and is easily one of the best centers in the game. His elite playmaking and rebounding makes him one of the most dominant forces in the league, and his international play is even better.

Joel “Do a 180” Embiid has set the league on fire, both on and off the court. His hilarious on-court antics have made him one of the most liked and hated guys in the NBA, but his play definitely backs it up. He is always in the running for DPOTY and this year had a great MVP campaign that eventually ended up coming just short.

There is clearly a ton of international talent coming from all over the world playing in the NBA, and these guys are then playing for their home countries and influencing other players to play basketball. The NBA has been pushing to expand globally, including the new African League that they have set up. It is only a matter of time before someone else takes down the US in international basketball, and this year could be the year.