Last night UFC fight night went down at the UFC Apex in Las Vegas, Nevada. It was an incredible night of fights that included two back and forth decisions between welterweight and middleweight contenders, as well as five incredible, jaw dropping knockouts.

I’m going to give you a detailed recap of my favorite fights as well as the main event. Read to find out how the best fights of the weekend went down.

Fight of the Night: Matt Semelsberger vs AJ Fletcher

Matt Semelsberger is a fighter out of Frederick, Maryland, only 20 minutes from my home town of Kensington. He trains out of Crazy 88 MMA and trains grappling and kickboxing at Clinch Academy, where I’ve trained Jiu Jitsu in the past.

I’m shamelessly a huge fan of Semelsberger. Not only is he putting Maryland MMA on the map, but he has two sub 16 second KO’s and brings excitement and explosiveness to every fight he’s in. 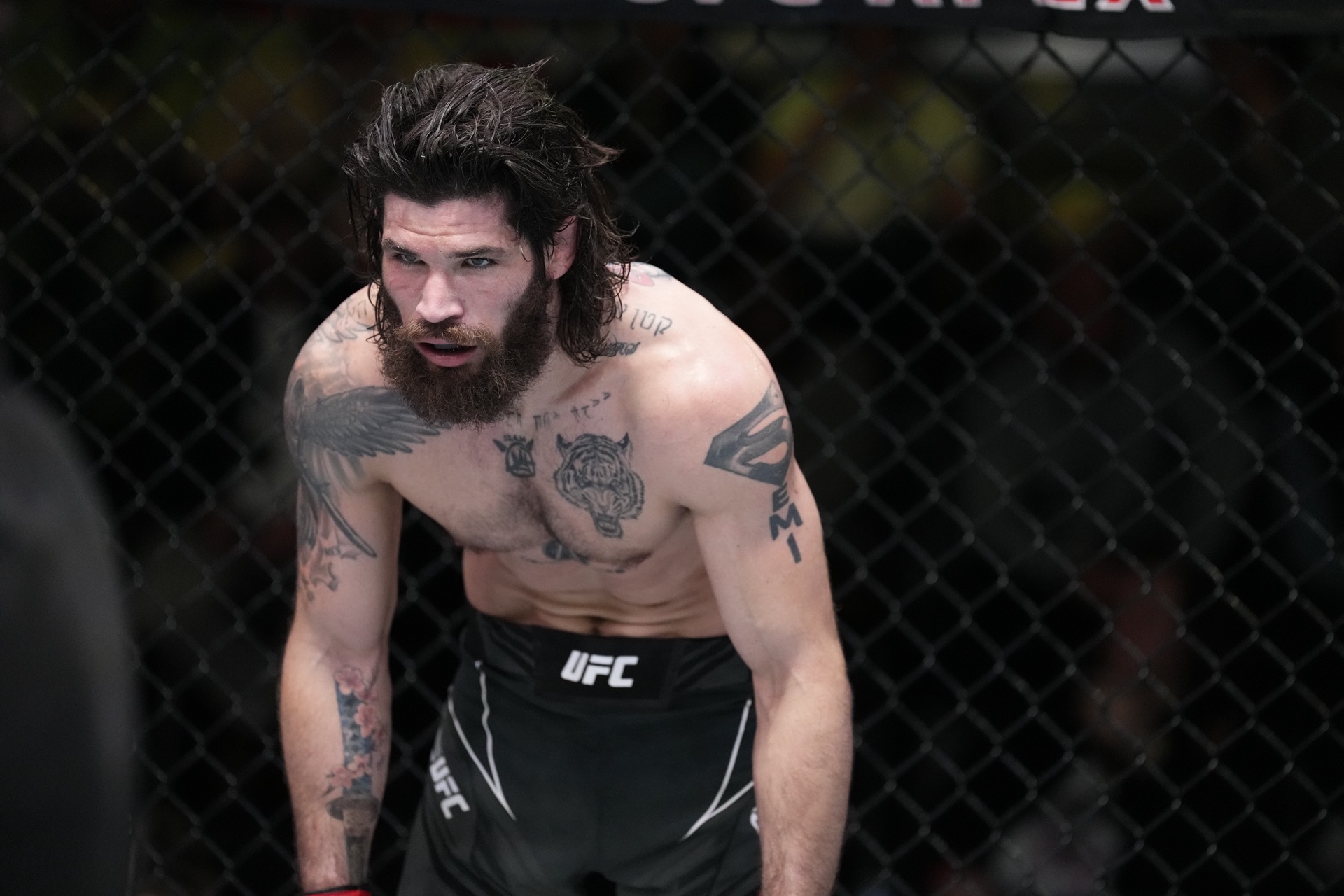 ‘Semi the Jedi’ has proven throughout his career that he’s extremely dangerous and dynamic with his striking. Fletcher is explosive as well, and is undefeated in his MMA career. He’s certainly a respectable opponent.

The first round started and the two men immediately collided. Semelsberger defended Fletcher’s first takedown attempt but could not defend the second. Fletcher controlled from top position for 9/10ths of the round and had two good guillotine attempts.

Round two started off closer with Matt and AJ exchanging blows until Fletcher landed a takedown about halfway through the round. Both men displayed good grappling and Semelsberger found his way on top. Matt landed some good, heavy elbows late in the round that cut open Fletcher.

The third round started and both guys threw big strikes. Matt landed a nice front kick and Fletcher landed a few nice leg kicks and then a take down with 3:45 left in the round but Semelsberger got up quickly.

With about 30 second remaining Semelsberger cut open Fletcher before Fletcher reversed position and ended up on top. With 15 seconds left both guys stood up and swung like mad men. Fletcher landed a hook that almost dropped Semelsberger before the Maryland native returned with a flying knee.

This was my fight of the night and it was a beautiful performance by both gentlemen. In my eyes the control Semelsberger had in the third round was the difference maker. It was a great showing for both fighters though and I look forward to seeing each of them fight again. 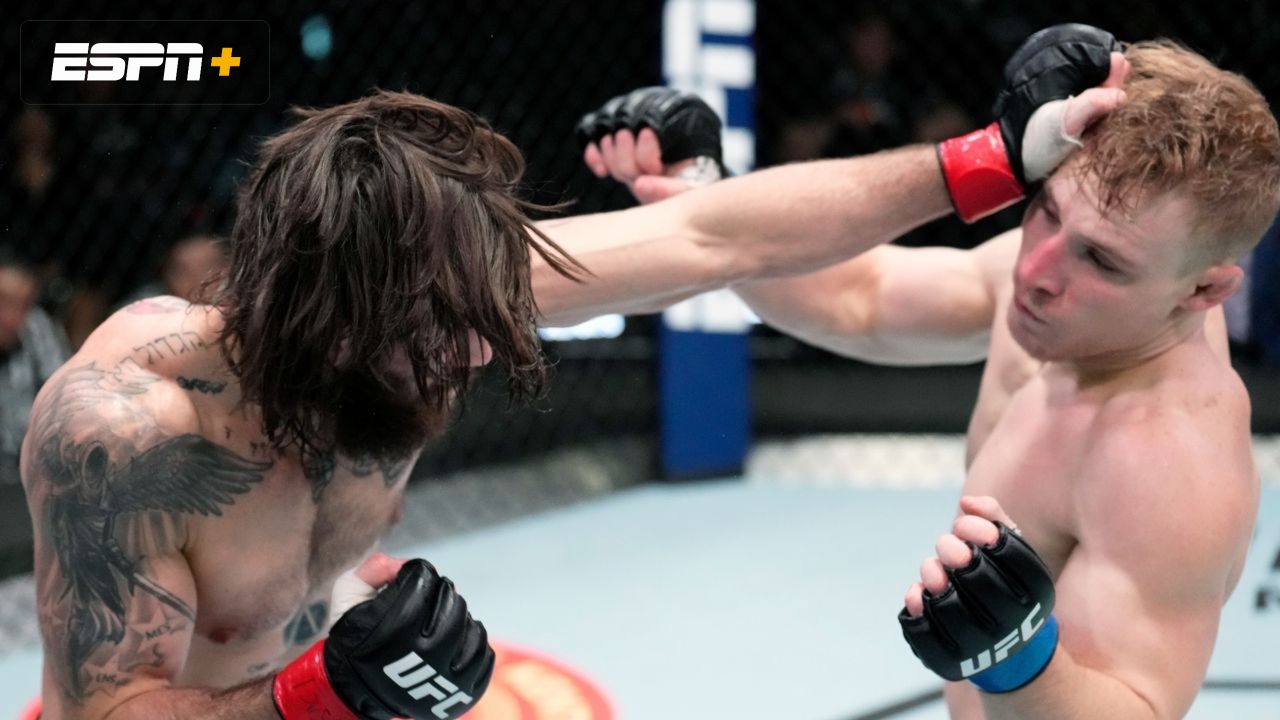 I was so excited for this fight when I heard Mckinney was coming in on short notice. I’m a huge fan of the guy and he has a really cool backstory that includes being tasered by police while on acid before, literally, dying and coming back to life.

As soon as the fight started Mckinney came out with a flying knee that knocked Dober off balance. He started battering Dober with punches and absolutely ravaged him. I thought the fight was over less than 30 seconds in.

Dober rallied but Mckinney continued spamming spinning fists and right hooks and hurt Dober very badly. He hit Dober with another flying knee that landed cleanly and perfectly timed a take down, controlling Dober on the ground for a minute or so. Dober landed a flush knee as Mckinney attempted a takedown and it crumbled him. He rolled to his back and Dober capitalized, jumping on top and dropping some bombs on Mckinney. He tried to cover up but the referee decided it was enough, and Dober won the fight via TKO.

This was an incredible showing for both fighters. Mckinney looked insane in the first minute and I truly thought for a moment that he was going to finish Dober in under 30 seconds. Dober showed his durability and used his veteran mindset to get through the storm and finish the fight.

Mckinney certainly has a big future ahead of him as this was only his third UFC fight and he looked good. His punches land with an incomprehensible amount of force. Dober called out Bobby Green after the fight, which would be a phenomenal fight for fans of violence.

Winner: Dober by 1st round TKO

This fight started off extremely close as Caceres looked clean and elusive on the feet. Yusuff landed some decent combinations but primarily scored with takedown attempts and knees in the clinch. The first round was close, but I think Yusuff won due to control time on the fence.

In the second round things changed dramatically. Caceres continued with his wide stance but Yusuff began landing heavy kicks to the inside of Caceres’ right leg. As the round progressed it became obvious that the kicks were starting to damage Caceres, and Yusuff poured it on.

He blasted Caceres’ lead leg more than 15 times in the second round and towards the end of the round it was apparent there was a problem. When Caceres returned to his corner at the end of the round, his team did not bring in the stool; instead they ice his leg while he stood to make sure it wouldn’t swell in between rounds. 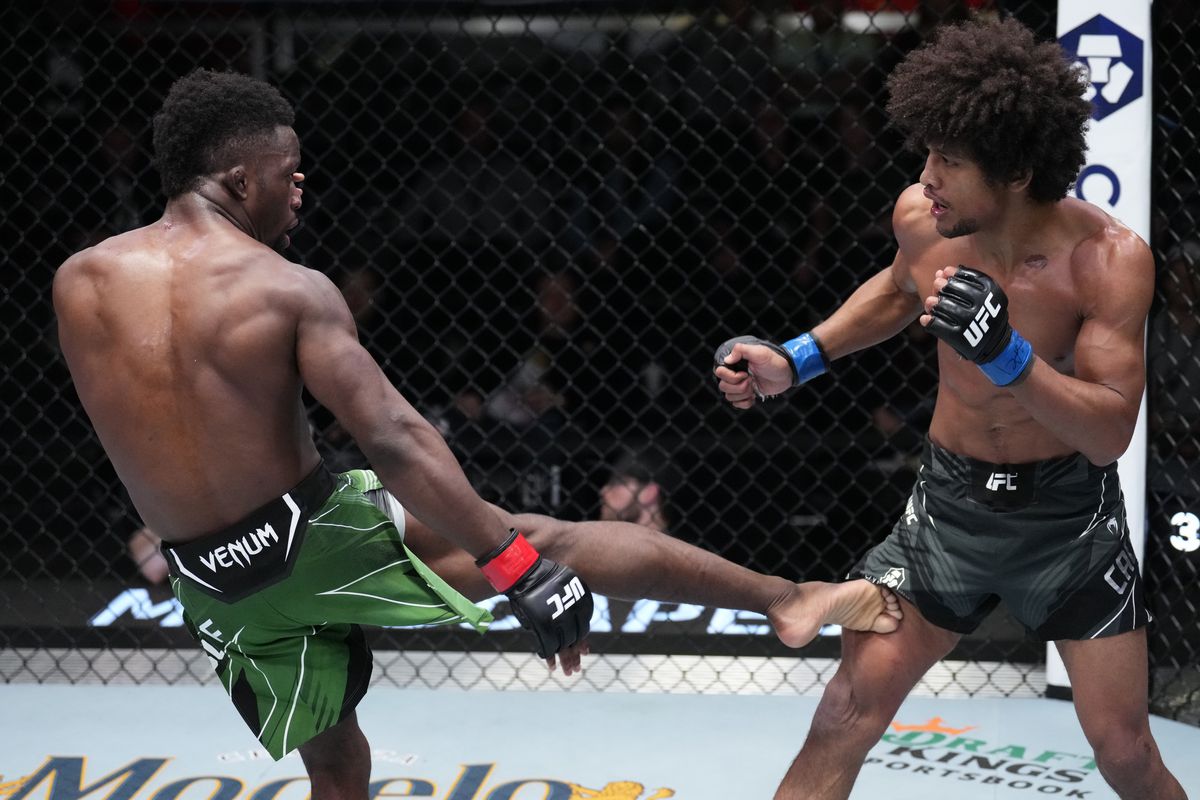 The third and final round was much more competitive than I expected. Caceres showed grit and heart in his performance by continuing to pressure and attack Yusuff. He landed clean left crosses multiple times, but never dropped or stunned his opponent.

Sodiq did a great job of diversifying his striking and using head, leg, and body kicks to wear down ‘Bruce Leroy’. The final round was much closer than the second, but Yusuff used the final thirty seconds of the fight to control Caceres on the cage and even landed a knee at the last second.

Song Yadong came out swinging from the ring of the bell, and less than 45 seconds in dropped Moraes who quickly got up. Moraes came back with good kicks and punches, but you could see the mark on his forehead where Yadong’s right hand had landed.

As usual Yadong continued pressuring and Marlong returned with some good counter combinations, but Yadong’s power would be too much for the Brazilian veteran.

Song would land a beautiful right overhand-left hook-right uppercut combination that dropped Moraes to the ground, knocking him out. Moraes fell back on the ground as Yadong stood over him with his hands stretched out, seemingly asking, “Are you not entertained?”

This was Yadong’s fourth knockout in the UFC and he’s 7-1-1 in his time with the promotion. A win like this should propel him into the top 10 in the Bantamweight division.

Both of these men are absolute monsters. At 205 pounds Ankalaev is 7-1 in the UFC and his only loss is a last second submission by Paul Craig during a fight in which Ankalaev was dominant the whole time. Santos was one of Jon Jones’ toughest fights, but has lost three of his last four. From 2017-2019 he won 8 of 9 and seven of them by KO, including a KO victory over former light heavyweight champion Jan Blachowicz. 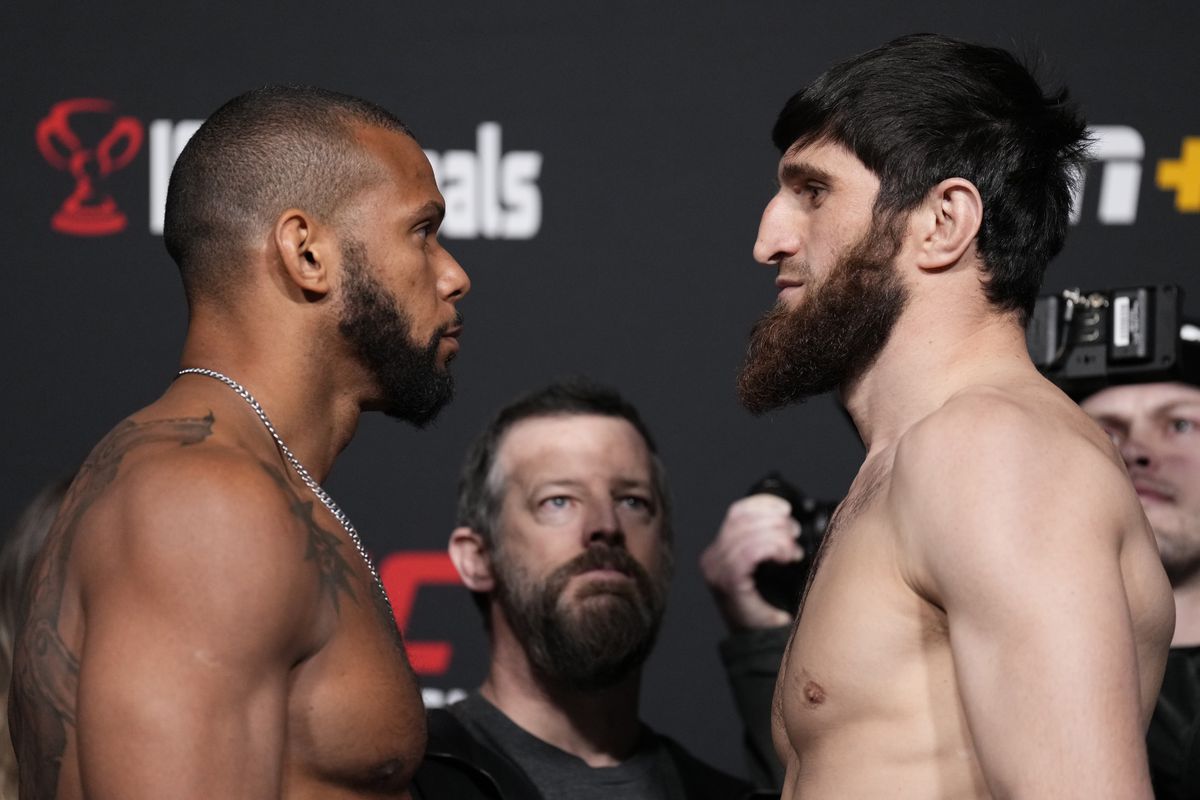 The two started off the fight timid as they knew their opponents each had the power to knock them out. Nobody landed a strike until Santos threw a leg kick about a minute in.

Santos landed a few leg kick’s before the two continued with their feeling out process. Ankalaev took his time and landed a clean right hook that looked like it stunned Santos just for a moment. The two exchanged body kicks for about a minute as well, measuring their distance and trying to chip away at each other.

Ankalaev wobbled Santos with another huge right hand as the chess match continued. Santos circled away, waiting for a moment to land a leg kick. Neither fighter seemed urgent in the first round, which isn’t necessarily a bad thing in a five round fight. The first round wasn’t super exciting, but Ankalaev definitely landed more damaging shots.

The second round started slow as well with the two big men feeling each other out. Santos chipped away with some good leg kicks and the two exchanged combinations as well. Ankalaev began closing in on Santos and trapping him in towards the fence, but Santos’ movement was very clean as he circled away to his left.

In the last two minutes he threw some nice combinations and connected to the body and the head of Santos. Both guys landed good shots in the final thirty seconds, but Santos dropped Ankalaev with a clean right hand before taking top control for the final seconds of the round.

The round was Ankalaev’s until there were 15 seconds left, then Santos dropped him. This is one of the tougher rounds to score, because many think a knockdown can warrant a 10-8 round. I think Santos hurt him significantly but didn’t earn a 10-8 due to losing almost the entire round.

Ankalaev seemed refreshed off the stool and threw some big kicks in the first minute. Santos landed some solid leg kicks but both fighters seemed slightly unsure of how to get inside without getting caught, but Santos at least landed some solid kicks to the legs.

They began really exchanging about halfway through the round, swinging big and landing. Ankalaev landed a shot that caught Santos off balance but couldn’t put him down. They continued exchanging kicks and you could hear the clash of shins in the arena.

They both landed big shots in the last moments of the round and it was an extremely close one. I thought this round was a toss up and the judges would be split on who won it.

Santos started off landing big winging hooks and a flying knee in the fourth round. He appeared to be done waiting around, and Ankalaev matched his energy. He pressured the Brazilian and landed big shots of his own. 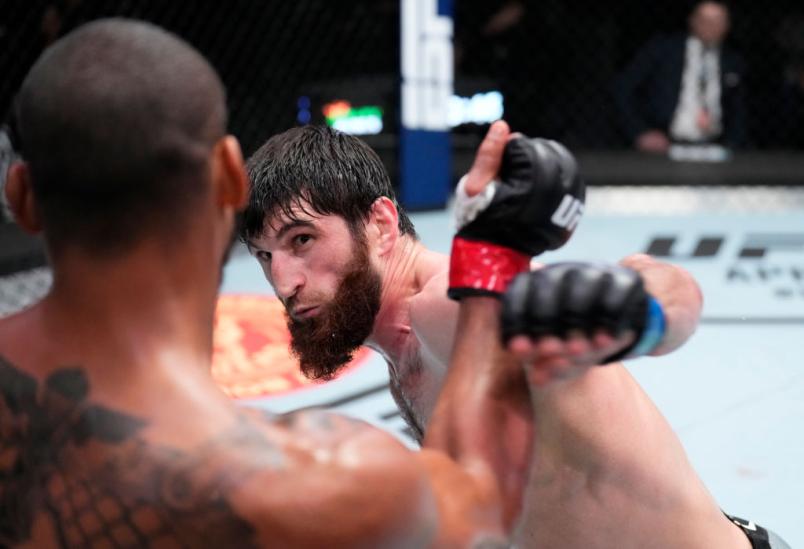 Santos started to look tired, but recovered a bit as the round progressed. He did throw some nice kicks before Ankalaev controlled him on the fence and took him down with thirty seconds remaining.

Getting that takedown was important to secure round four. He didn’t land many ground striked but it certainly helped on the judges scorecards.

Santos’ body language looked bad in between rounds as he continued to tire. He landed a few good leg kicks but was sitting back too much in the fifth and final round. Ankalaev clinched his opponent about halfway through the round and spammed knees to the legs of Santos.

They would continue clinching on the fence for the remainder of the round as Ankalaev would secure the decision with a strong but unappealing performance. He got the job done though, in my eyes and the judges eyes, and will look to fight another top contender soon. He showed that he can fight for five full rounds and is in title contention in the Light Heavyweight division.