UFC London will be the first time the UFC hosted an event in London since March 16th, 2019, exactly three years ago this Wednesday. There was an event scheduled for March of 2020, but it was canceled due to a tiny little global pandemic. Due to Covid-19, the UFC has been primarily using their home base in Las Vegas, as well as the Flash Forum in Abu Dhabi, often referred to as ‘Fight Island.’

This fight card is going to be fun for the fans in the O2 arena as there are eight English fighters, two Welsh fighters, and a Scottish fighter on the card. This Saturday’s fights will be headlined by young British Heavyweight contender Tom Aspinall and Russian kickboxer Alexander ‘Drago’ Volkov.

I’m going to break down my four favorite fights on the main card, as well as talk about two fights on the undercard that I’m extremely excited for.

Cody Durden is 1-1-1 in his UFC career but was 12-2 on the regional circuit. His most recent fight was a unanimous decision victory over Aori Qileng, where the most exciting thing that happened all night were Durden’s post fight comments.

“I had to send him back to China, where he came from.” -Cody Durden after defeating his opponent Aori Qileng

Durden’s comments received an immediate awkward silence from the UFC Apex’s crowd, as well as countless social media posts and tweets calling his comments a blatant example of anti-Chinese racism. Honestly, I don’t like Durden. He’s not an exciting fighter and he’s not exactly a nice guy. He’ll be facing off a tough opponent who’s making his UFC debut.

Muhammad Mokaev is fighting out of Manchester, England and is undefeated in his short Professional career. I’ve been watching Mokaev since he made an exhibitional debut with Celtic Gladiator and finished his opponent in under a minute with body kicks.

Mokaev, like his idol Khabib, wears a Papakha before and after his fights to celebrate his heritage and culture.

Mokaev is a skilled grappler with Dagestani connections but has been improving on his striking for the past three years. He’s clean, technical, and fast but doesn’t hit the hardest with his punches, although his kicks are very powerful.

I’m expecting (and hoping for) Mokaev to put on a clinic. I’m slightly biased because he’s the first amateur fighter I watched make it to the UFC, but I’ve been watching him for a reason. He was 23-0 in his amateur MMA career which was headlined by becoming an IMMAF amateur world champion. In his pro career he’s 6-0 with two knockouts and two submissions.

This fight is going to be very interesting. Krylov is a Ukrainian fighter who’s currently in his second stint in the UFC. He was 6-3 in his first go with the organization, winning and losing all of his fights inside the distance. In his second try he’s currently 2-3 but has only lost to the best of the best in the division. 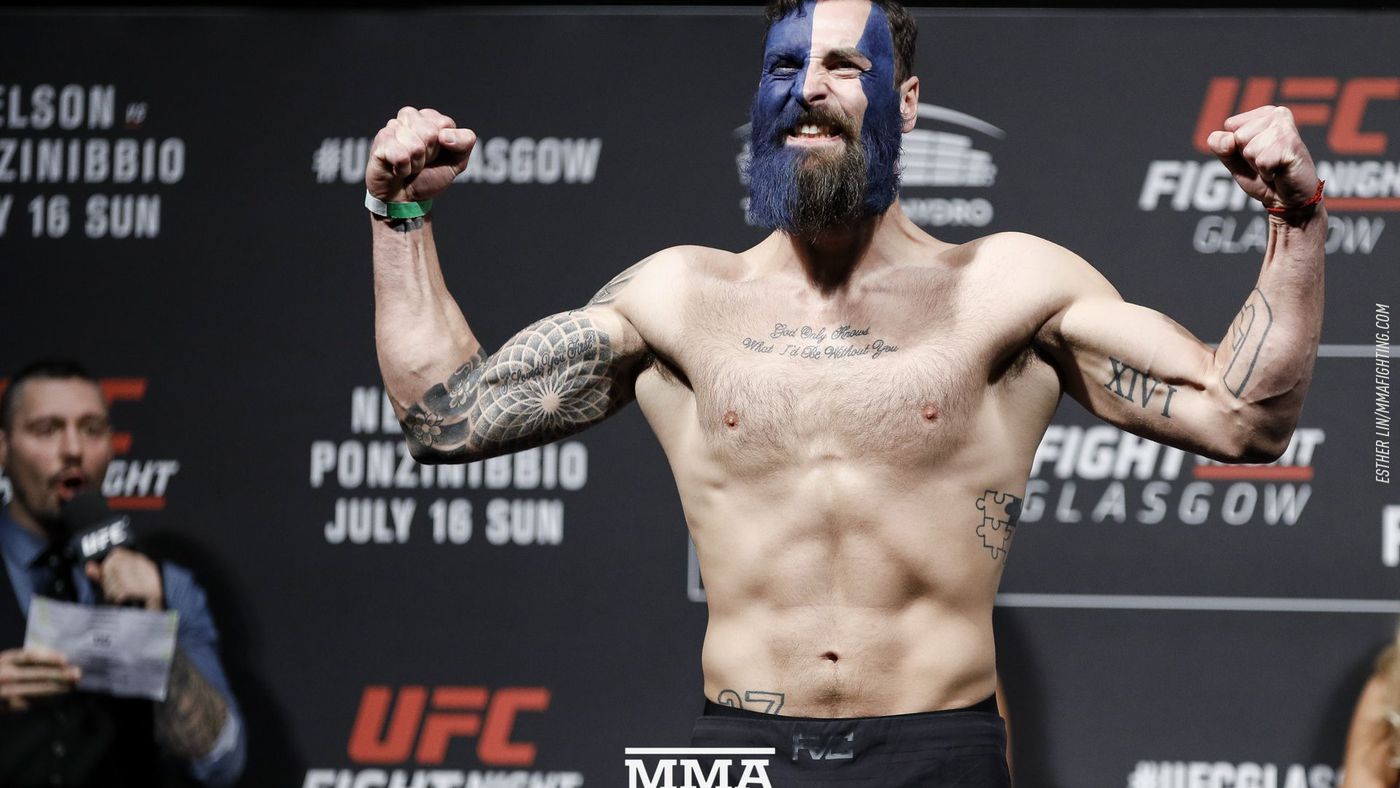 Krylov is a skilled and well rounded fighter who will be taking on a submission machine, Paul Craig. The Scottish fighter, nicknamed Bearjew, is 4-0-1 in his last five fights, with two knockouts, two submissions, and a draw. His most recent fight was against hot prospect Jamahl Hill, who learned a lesson from Craig when he snapped Hill’s arm in an armbar.

I expect this fight to not last very long. I’m not sure it’ll be an immediate finish but both fighters have multiple ways to end the fight, and both fighters have been finished a combined 10 times in their careers. Plus the line is juicy.

Ilia Topuria is a monster on the ground and a nightmare on the feet. He’s undefeated in his career and has finished all of his fights in the first round except for two; one was a 2nd round submission, the other was a unanimous decision victory in his UFC debut. 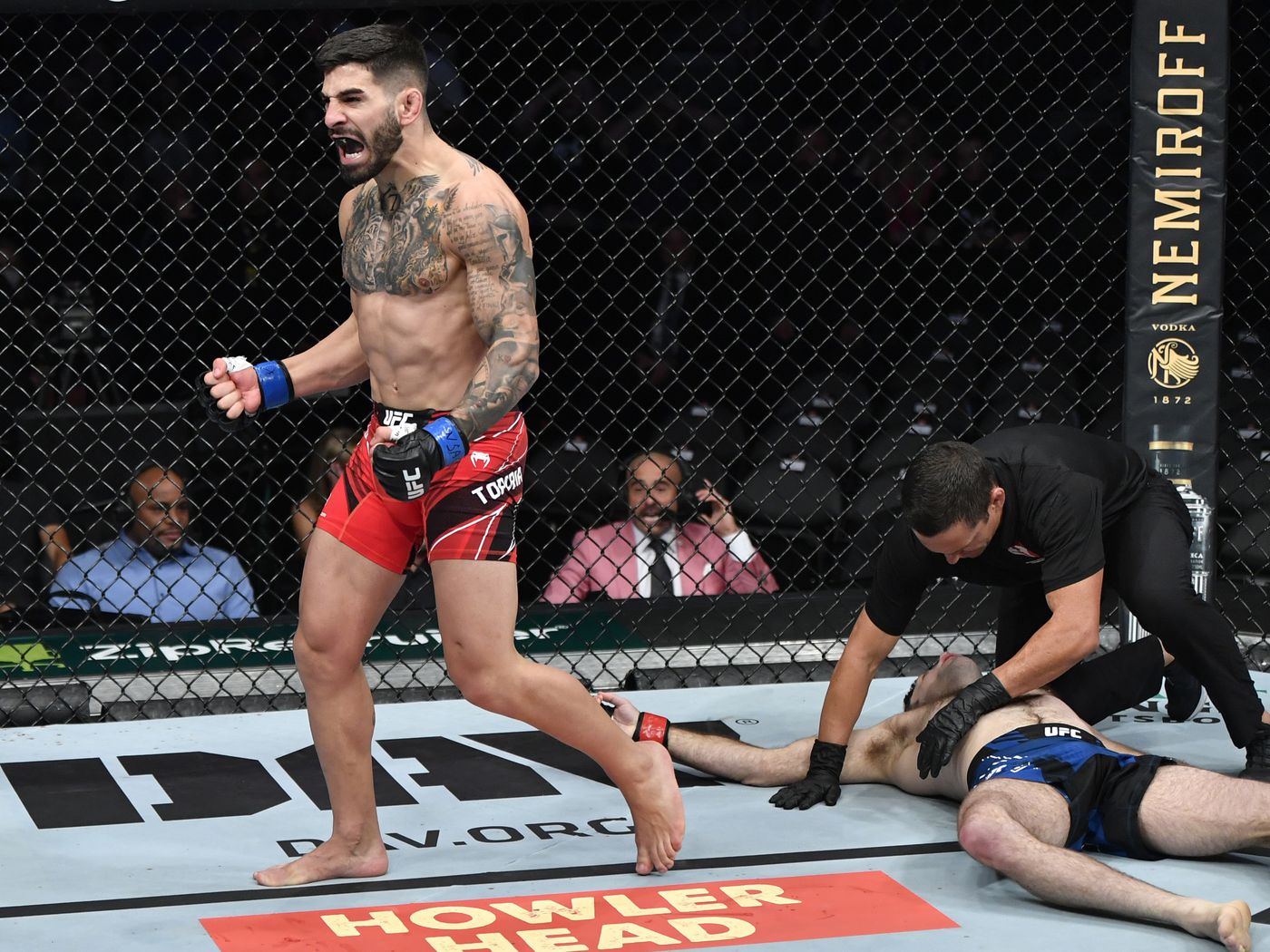 Herbert is another English fighter who will be looking to please the home crowd. He’s 1-2 in the UFC but showed promise in his debut before getting knocked out in the third round. He’s a good striker and will have a massive eight inch reach advantage in this matchup.

Topuria is an absurd -380 in this fight, and as much as I appreciate his abilities I’m not throwing that kind of money to win one unit. I do however like the over in this fight. Topuria without a doubt is known for smashing his opponents early, but I think Herbert can use his length to keep him at bay for a little while.

I’m very prepared to look stupid if Topuria wins in round one, but I like the line. Topuria ITD is also in play but the line is still -150. 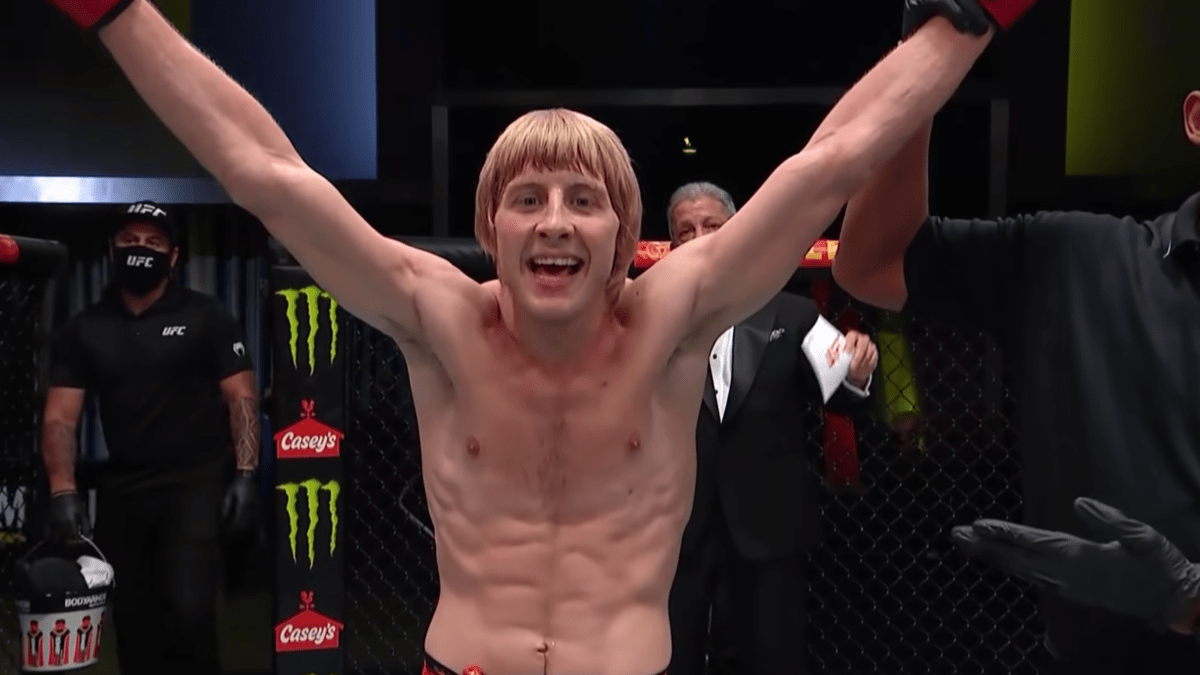 Paddy “The Baddy” Pimblett will look to put on a show in his home country.

Will the Paddy Pimblett hype train continue? I’m not quite onboard yet, although I did rewatch his debut and enjoyed it. He’s a fantastic grappler but in his UFC premiere he kept his chin up and swung for the fences. He’s one of the most hyped up prospects in the UFC because of his demeanor and attitude.

The Scouser almost got dropped in his first fight but recovered and ended up finishing his opponent in the first round. He’ll look to start his first UFC winning streak against Mexican fighter Kazula Vargas.

Vargas has fought mid-level opponents at best and is still 1-2 in his UFC career. His most recent performance was a solid showing in which he overcame three takedowns and won a decision.

I expect Pimblett to do his thing here. He’ll probably swing for the fences because he’s a crowd favorite fighting in London, but he’s got to be careful because Vargas has only gotten better.

Arnold Allen is 8-0 in the UFC and has two submissions to go with his six decision victories. He’s a good grappler with heavy pressure and has won four straight by unanimous decision. 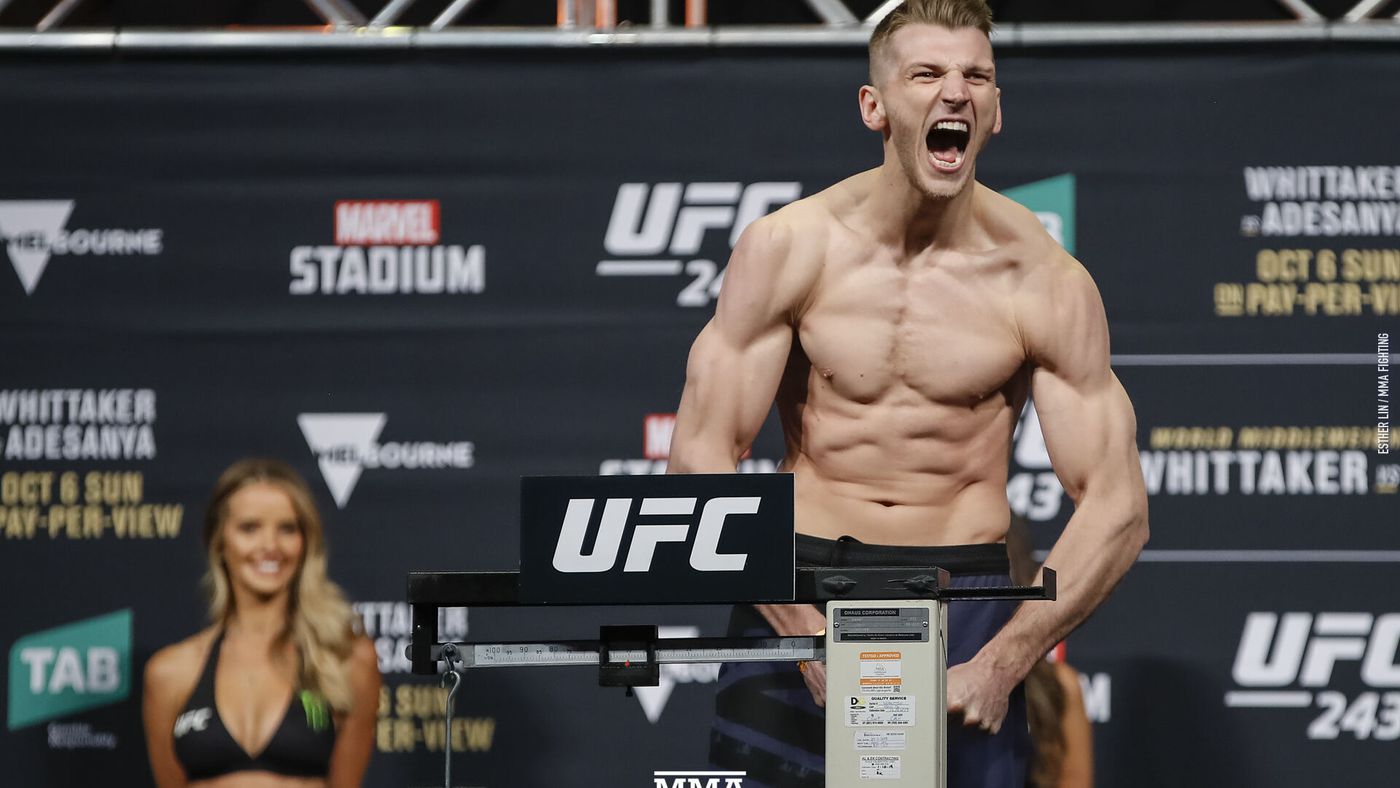 Dan Hooker will look to get back on track after his loss to Islam Makhachev.

Dan Hooker is 11-7 in the UFC but has fought a murderer’s row of Islam Makhachev, Dustin Poirier, Paul Felder, prime Edson Barboza, Gilbert Burns, and Jim Miller. Hooker is a great kickboxer who trains with Israel Adesanya in New Zealand, but is 1-3 in his last four fights.

I expect Hooker to come out and take what’s his. Allen is a good opponent but he’s a step down in competition for Hooker, and I’ll be looking to see Dan put on a clinic and stuff most of Allen’s takedowns.

The headlining fight at UFC London is going to be a fun one, people. Volkov, nicknamed ‘Drago’, is an experienced and technical kickboxer who stands towering over his opponents at 6’7”. He’s only lost to three men in his UFC career, two of which have been Heavyweight title challengers.

Aspinall is one of two young, exciting prospects towards the top of this division, the other being Tai Tuivasa. Aspinall is fighting out of Liverpool and has finished all of his UFC fights in under six minutes and thirty seconds. His average UFC fight time is three minutes and two seconds. 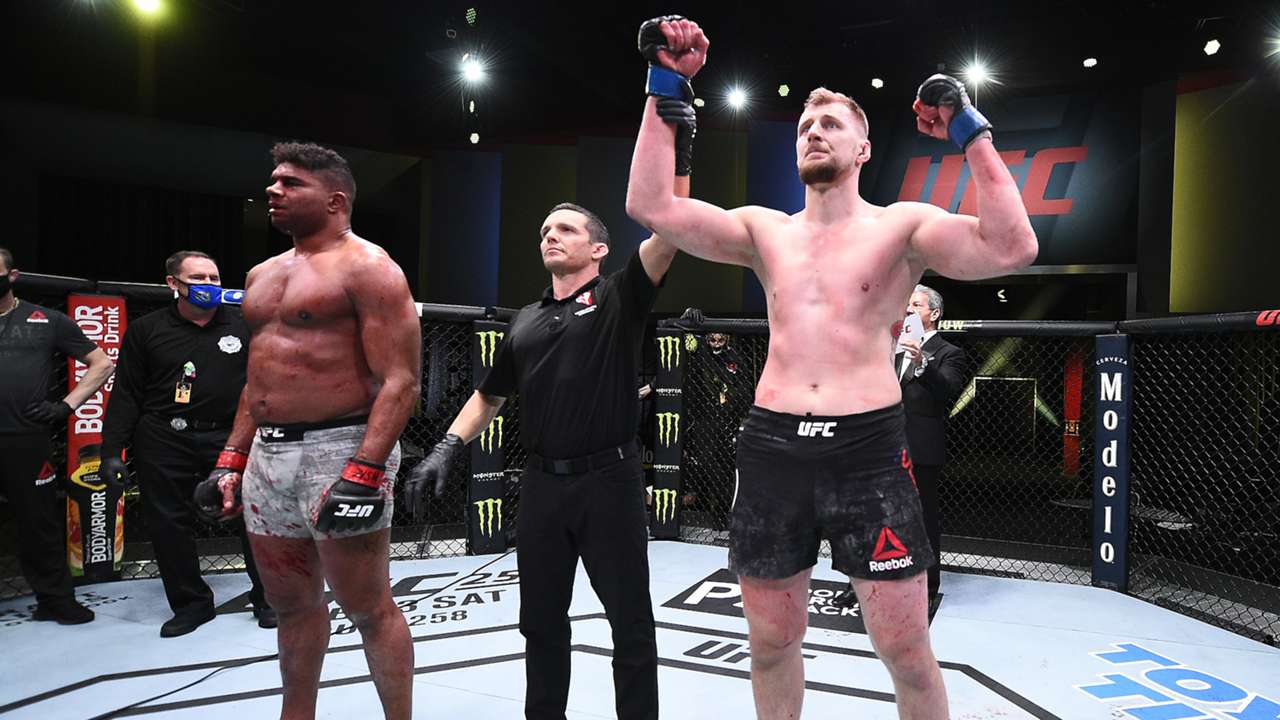 I’m not exactly sure who’s going to win this fight but I am fairly certain of how it’ll play out. Volkov is extremely tall and has an 80” reach, so his distance management is a huge factor in all his fights. He’s really technical and moves very smoothly for a big guy. He’s also shown he can go five full rounds in his fights against Curtis Blaydes and Cyril Gane.

Aspinall will be fighting a five round fight for the first time if it goes that long. He’s a great striker and a very skilled grappler as well, so we’ll see if he tries to mix in the wrestling at all. I’m expecting the fight to go at least two full rounds and think Volkov has enough to get it done.

Prediction: Volkov by fourth round KO