What Can The Philadelphia 76ers Do To Win in 7 Games? In the last two days of the NBA Playoffs, we saw the Brooklyn Nets pull off an amazing comeback at home against the Milwaukee Bucks. The Philadelphia 76ers had the best record in the Eastern Conference and had strong odds to beat the Atlanta Hawks in the second round quickly. However, that is not the case, as the Sixers collapsed once again when it mattered the most.

The Atlanta Hawks were one of the surprise teams coming out of the Eastern Conference and continued to prove the doubters wrong as the team pulled off one of the biggest comebacks in NBA playoff history to steal Game 5 on the road.

WHAT CAN THE SIXERS DO TO REGAIN MOMENTUM FAST

The Philadelphia 76ers essentially dominated until the last quarter of the game until the ultimate collapse behind the heroic efforts of their star Joel Embiid who came back strong, notching a double-double and great all-around play. Seth Curry also carried the load in the offensive end by scoring 36 points and making seven of twelve shots behind the arc. Other than Trae Young and John Collins, the Sixers were able to minimize the damage done by the Hawks starting five.

The Hawks were down by 26 points heading into the fourth quarter. It seemed like the game was over, and the 76ers were getting ready to head to Atlanta to face their opponent on Friday. Just a quick flashback to the game on Monday, the Hawks came back from an 18 point deficit to tie up the series at two games apiece.

Here, history repeated itself as the team with the best record in the Eastern Conference this regular season is staring at elimination as they head into hostile territory before a possible Game 7 at home if necessary.

The Atlanta Hawks overcame an 18 point deficit late and took the lead with about a minute thirty left in regulation. Trae Young led the way with 39 points, but two role players came in clutch off the bench as they were the next in line as the other three starters Clint Capela, Bogdan Bogdanovic, and Kevin Huerter, struggled shooting the ball.

Danilo Gallinari had 16 points, and Lou Williams was clutch in the 4th quarter, scoring all of his 15 points and shot 7-11 from the field, while just seven points in just under twelve minutes in the playoffs. Coach Nate McMillan of the Hawks had this to say about his team’s efforts, “These guys just continue to show true character. Just no quit in these guys. 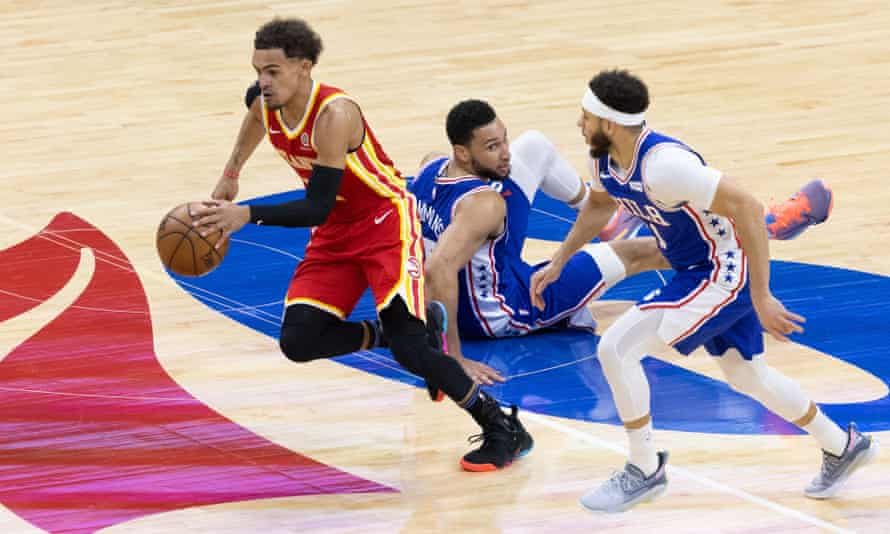 The Philadelphia 76ers lost back-to-back playoff games after leading by 18 points or more against the Atlanta Hawks. The Sixers led by as much as 18 in Game 4, and squandered a 26-point lead in Game 5. What can the Sixers do to win in seven games?

GETTING THE OTHER SIXERS STARS INVOLVED

The Philadelphia 76ers had numerous opportunities to end this series in five games but collapsed in the crucial final minutes of the last two games. So the question becomes, what types of necessary adjustments does the team have to make to have a chance to close this series in seven games?

Usage among stars takes a hit when you have three solid players leading a team. I think the key to winning for the 76ers is for coach Doc Rivers to examine Ben Simmons’s role. We can all agree he is a great playmaker and defensive player for a point guard/forward. However, scoring-wise he is not a threat from the three-point line and has a difficult time knocking shots from the charity stripe in crunch time as he went 4-14 at the line.

If every role player sticks to their role, the team needs to find ways to get Tobias Harris involved with better shot selections as he only had 4 points in 37 minutes of play. Harris shot 89.2 percent from the free-throw line in the regular season. Simmons’s unwillingness and inability to shoot makes spacing on the floor difficult, so being a playmaker and making high percentage plays will most likely help the team get a crucial victory in Game 6 to avoid elimination.