Who Can Take Down The United States For Men’s Basketball Gold In Tokyo?

The United States men’s basketball team has dominated the Olympic stage for years. The last time the US did not win gold at the Olympics was in 2004 in Athens, Greece when Argentina took gold. Basketball has been an event for 18 Olympic games. Team USA has won 15 gold medals and medaled in the 3 Olympiads they did not win. What teams, if any, can dash the hopes of the Americans searching for their 16th gold medal in Tokyo?

Outside the US, Australia has the most NBA players in the Tokyo Olympics’ men’s basketball with 7.

Australia has an extremely solid and well-rounded roster. All 7 NBA players on the roster have played meaningful minutes in their respective NBA careers.

This is one of the best defensive rosters in the entire tournament. Matisse Thybulle won the Defensive Player of the Year award in college and was an NBA all-defensive second team member this past season. Matthew Dellavedova is known for his hustle and ability to harass opposing guards.

Aron Baynes, in his NBA career, averages 4.6 rebounds and 6 points in just 16 minutes.

This team is not going to lack scoring either, with Joe Ingles, who averaged 12 points a game this season on an amazing 45% from three. Dante Exum and Patty Mills are also solid scorers who will be able to provide needed points for Australia.

Nigeria has the most players on an NBA roster in the Olympics besides the US. This team is highlighted by Timberwolves guard Josh Okogie and Pistons center Jahlil Okafor.

Okogie has shown he can score at a high clip shooting 40.2% from the field last season in limited minutes.

Jahlil Okafor was a former 3rd overall pick. After averaging 17.5 points in his rookie year, his production dropped as his career progressed. He is a big body that is willing to get dirty in the paint and is able to score in the low post.

The team is rounded out by lots of young players like Miye Oni, Jordan Nwora, and Precious Achiuwa. All 3 players averaged double-digit points in their college careers, and Achiuwa averaged a double-double in his one year at Memphis.

The one thing Nigeria is lacking is 3 point shooting. Okogie and Oni are the only players who can shoot the 3 ball, but they are not exactly sharpshooters. They should have no problem scoring in the paint, but the perimeter shooting is a question mark for this team.

This is a France roster with lots of talent all over the court. Rudy Gobert is an NBA defensive player of the year who averaged a double-double last season.

Nicholas Batum played a big role offensively in the Clippers playoff run this past season. He looked great scoring the ball and was lethal from the corners all season.

Frank Ntilikina and Timothe Luwawu saw reduced roles in the NBA this season but are very capable scorers and should contribute on offense in a big way. 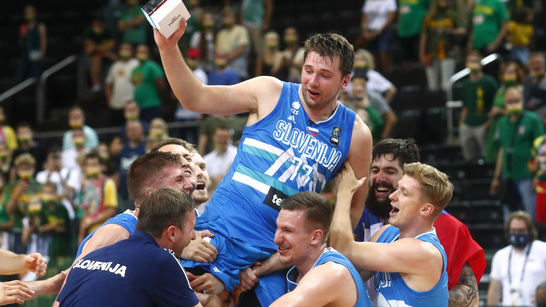 Luka Doncic brought his magic to Slovenia, as his country has finally qualified for the Olympics in men’s basketball for the first time ever.

Any team with Luka Doncic leading the way has a chance in any game. He does not have much of a supporting cast of players, but I could not fail to mention Slovenia, who qualified while riding on the back of Doncic.

On a side note, Canada had the most NBA players outside the US with 8, but they failed to qualify for the Tokyo Olympics.