After acquiring offensive players with either of their opening-round draft picks with quarterback Zach Wilson and offensive lineman Alijah Vera-Tucker, the New York Jets continued the trend in the second round of the NFL Draft with Ole Miss receiver Elijah Moore.

A highly talented wideout in this draft, Moore fell into Gang Green’s lap at No. 34 overall. Superb hands, sheer athleticism, and effective speed provide Moore with spectacular potential. He’s expected to be a significant asset of this Jets team early on.

Moore’s speed could lead to him earning the majority of his reps in the slot, which is where he thrived during his collegiate tenure at Mississippi, where he amassed 1,193 receiving yards and 86 catches in eight games last season.

Possessing a talented slot target to complement split end Corey Davis would assist in the development of both Zach Wilson and the offensive unit as a whole.

The versatility in Moore’s game could certainly lead to offensive coordinator Mike LaFleur utilizing him in a number of ways. Slants and bubble screen-type plays should be in Elijah’s future. Maybe sweep and end-around calls as well? A little creativity from the newly hired OC? 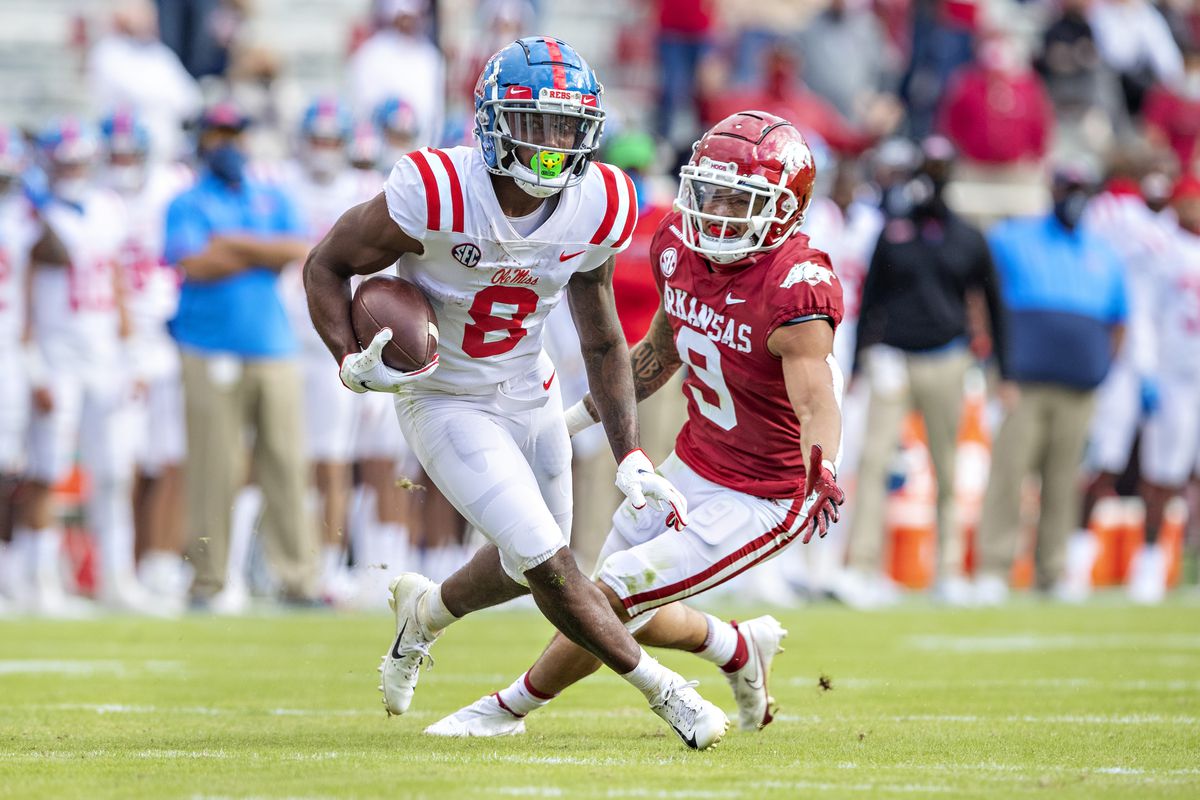 The New York Jets continued the trend of drafting athletic, offensive players in the second round with Ole Miss receiver Elijah Moore.

The on-field qualities could also pave the way for Moore to succeed as a return specialist at the professional level. His partaking in this area would essentially be a repeat of what occurred during his Ole Miss tenure. From 2018-20, Moore returned 27 punts for 133 yards (4.9 yards per return). In 2018, he returned 12 kicks for 222 yards (18.5 yards per return).

From the time he was 12, Moore started working with wide-receiver trainer Sly Johnson. Since then, Moore has lived an “accelerated lifestyle,” according to Allen. He has trained with wide receivers such as Odell Beckham Jr., Stefon Diggs, and Antonio Brown, absorbing knowledge like a sponge from the NFL veterans. As he went to college, he learned from teammates DK Metcalf and A.J. Brown.

“He can line up wherever you want, and he’s going to execute it at a very high level, even though the routes might be a little bit different, the stems might be different, the releases might be a little bit different. He’s showcasing his ability to be as versatile as possible in terms of being at different parts of the field, being at different positions, understanding what needs to get done, so when the ball gets to his hands, he can still do what he does best, and that’s run after the catch.” — New York Jets coach Rob Saleh

There are very high praises and expectations for Moore, and he is ready to show off his talent.