I learned another hard lesson today, but it’s my fault. I take full responsibility for believing that the UConn football program could cover against FCS Holy Cross. On paper, this game looked like a lock for the Huskies.

However, the Crusaders rolled into Connecticut and whooped UConn’s ass. There is no other way to describe it, in my opinion. Maybe I am biased towards the Huskies because I graduated from the school and saw many dominant seasons at Rentschler Field.

Nevertheless, I finally learned today that you should never bet on UConn football. If you think that UConn will win or cover, I recommend looking elsewhere because the Huskies will find a way to rip your heart out.

The Huskies opened as a three-point favorite over Holy Cross, the projected champion of the Patriot League. The Patriot League is one of the worst FCS conferences in the country, but Holy Cross is a legitimate team amongst the group.

When I was breaking down the lines and odds, I contemplated betting UConn at -2.5 and buying a half of point. This took my payout down substantially, so I decided to roll with Connecticut at -3.

I believed the worst-case scenario would be a push, but this was wishful thinking. I am a positive bettor because it’s way too stressful to be negative, but I knew from the first drive the Crusaders could play.

Holy Cross started the game with an electrifying touchdown drive in front of nobody at Rentschler. The stadium holds 40,000 people, but the only time it experiences full capacity is for a USWNT exhibition match.

Holy Cross went 77 yards in nine plays thanks to sophomore quarterback Matthew Sluka, who was sensational all day. I would have traded him for Connecticut QB Jack Zergiotis in a minute.

As soon as UConn took the lead and found some momentum, Zergiotis asked Holy Cross, “Do you want to win the game because we don’t.” He threw an interception to Holy Cross DT Jason Modiak, who returned it for a 29-yard touchdown tying the contest at 14. 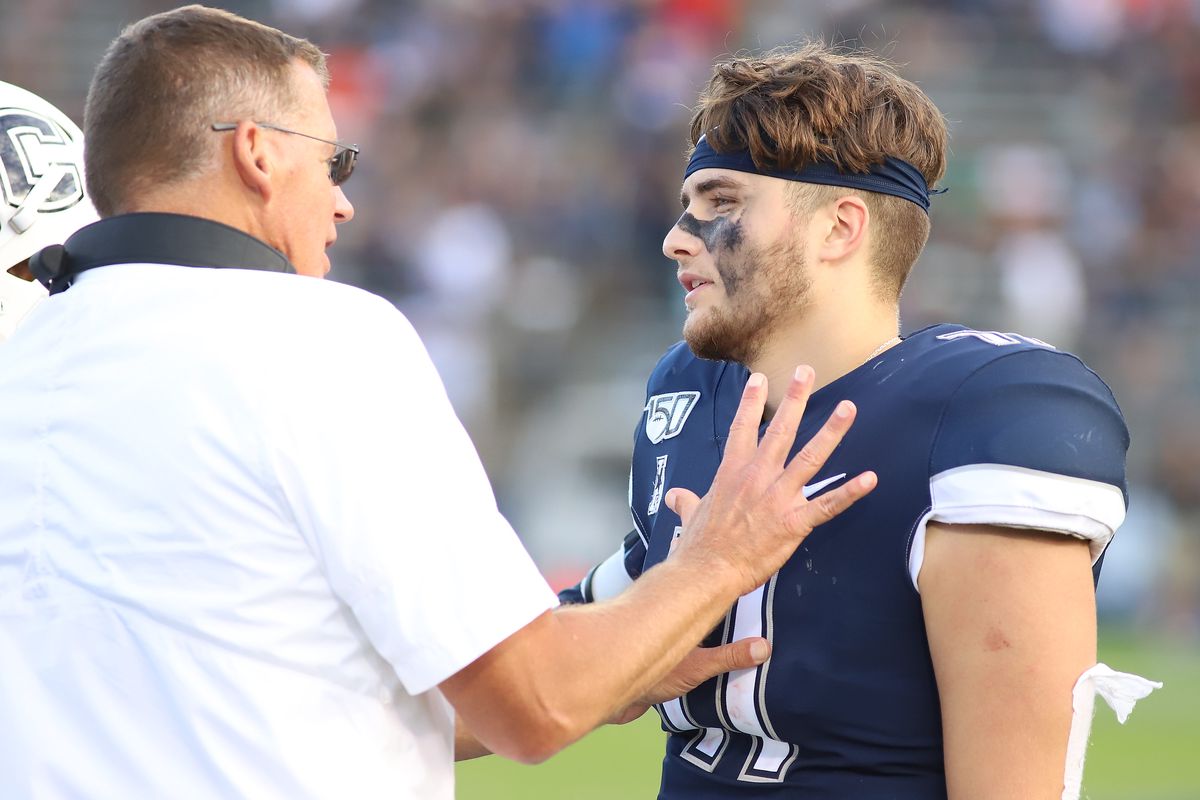 The Huskies went into the half down three, but the 24-21 score looked promising for my -3 bet. If UConn were going to win, they would cover, but the Huskies only scored one touchdown in the second half.

Rock bottom came when the Huskies cut the Crusaders’ lead to three points before missing one hundred tackles and allowing Sluka to gain 76 yards on third down to set the team up for a score.

Holy Cross had two interceptions down the stretch to officially take the Huskies out back and put them out of their misery.

Hey UConn Football, that was Unacceptable

All the players on the field are 18-23 years old, so they are still kids. Despite this, there is no excuse for UConn to play as they did at home against an FCS school that is not nationally ranked.

UConn looked like they did not want to play football, and that’s my biggest concern. They had no grit and could not respond when their backs were against the wall. The main issue is that this was a game where UConn should have been able to respond.

Holy Cross deserves a lot of credit, but Connecticut shit the bed. So today, I learned a hard lesson once again, never bet on UConn football.